Verifysoft found a serious bug in Mono C# compiler during the development of "CTC++ for Java and C# (Code Coverage for C# and Java).
The binaries compiled with the yet unfixed compiler are rendered untrusted, at least must be then recompiled with a future fixed version. The bug is confirmed by Novell:
https://bugs.launchpad.net/mono/+bug/144734
https://bugzilla.novell.com/show_bug.cgi?id=328136
A new version (4.2) of Testwell CMT++ Code Complexity Measures Tool for C/C++ is available.
CMT++ 4.2 comes with new features, i.e.:
Verifysoft Technology announced today the availability of "CTC++ for Java and C#, an add-on for Testwell CTC++ Test Coverage Analyzer for C and C++.
The add-on extends the Code Coverage capabilities of CTC++ from C and C++ to Java and C#.
The tool analyses for all coverage levels as required in "critical" software projects: Function-Coverage, Decision-, Statement-, Condition-, Multi-Condition- (MCC), and Modified Condition / Decision Coverage (MC/DC).
Testwell CTC++ and "CTC++ for Java and C#" help to obtain certifications, i.e. DO178-B.
A new version of Conformiq Qtronic, the leading model driven testing solution, has been released.
Here what´s new in Conformiq Qtronic™ 1.1: 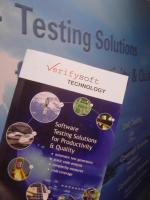 A new Verifysoft company and product flyer is available for download. The brochure provides information on our software testing and analysis tools, automatic test generators, code coverage and metric analysis tools, unit test tools as well as some background information about our company.
Download:   English        Deutsch        Français
A new version of Testwell CTC++ for Symbian Target Devices add-on package (CTC4STD) has been released.
With the new version the instrumented file can now be also a C file (compiled as C code). Previously, the instrumented code could be compiled as C++ code only.
Testwell announced the release of Testwell CTC++ Test Coverage Analyzer version 6.4.
The new version introduces the ´ctcwrap´ capability also on Windows platform. It facilitates extremely simple way to do "ctc-builds" with existing makefiles and other build arrangements.
The IDE integrations to Visual Studio .NET 2003 and to Visual Studio 2005 are renewed, making the usage simpler and more powerful.
There is also a "power-user capability" introduced to aggregate coverage data in a controlled way of separate/independent "ctc-builds" and their test sessions.
Our maintenance customers will receive the version without supplementary fees.
Two Nokia Research Centre researchers published a paper on the use of Conformiq. The paper appears in the collection of peer reviewed papers for TESTCOM/FATES 2007, a leading conference on mathematics and formal methods based testing.
This year the joint conference was held in Tallinn, Estonia. Antti Huima from Conformiq Software gave his invited talk on the implementation architecture of Conformiq, the world´s leading model driven testing tool.
In their paper the researchers report on the use of Conformiq for testing a "device level service", and mention that "bugs were found and the mentioned errors were such that... there were no explicit requirements that would have to led test cases uncovering the errors".
The conference proceedings are available as LNCS 4581 from Springer.
Testwell announced the release of version 3.2 of the Host-Target add-on for the leading code Coverage Tool Testwell CTC++.
The new version contains further optimizations at the target run-time behaviour. Also model implementations for the low-level data transfer routines have been introduced.
The CTC++ Host-Target add-on allows the analysis of code coverage in any embedded targets.
Our maintenance customers will receive the add-on free of charge.
Verifysoft Technology proudly announce an CTC++ Addon package,that let users of the FreeBSD operating system / Intel seamlessly use the Testwell CTC++ code coverage tool on that platform.
The delivered executables are running transparently in Linux ABI mode,the library (and subsequently the instrumented applications) are native FreeBSD executables...
Also the code complexity measures tools Testwell CMT++ and Testwell CMTJava are working "out of the box" with the FreeBSD operating system.
Until now all Testwell tools have already been available for Windows, Linux, HP-UX and Solaris platforms.
The CTC++ for Symbian Target Devices add-on v3.1 package has been upgraded to work on Symbian OS v9.x (EKA2 kernel) based devices. Target support for the previous Symbian OS level upto v8 (EKA1 kernel) has been discontinued. Support for the EPOC emulator (Symbian OS before and after v9) use in the CTC++/Windows version continues unchanged.
Further information about CTC++ for Symbian 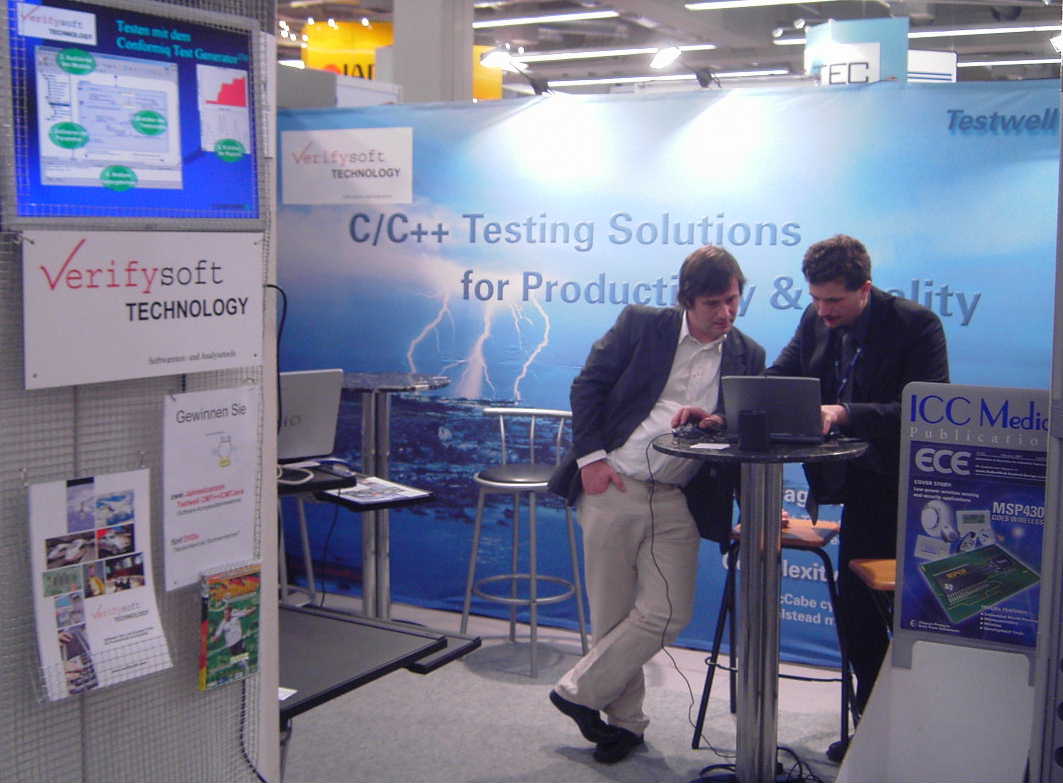 At Embedded World in Nürnberg (Germany) Verifysoft Technology has presented several new tools for testing and analysing embedded systems.
The code coverage analyzer Testwell CTC++, allows measures of test coverage in any (even smallest) embedded targets.
More than hundred visitors had a look to Conformiq. Conformiq is a new model based testing tool for test case generation and execution based on existing UML models.
further information: Embedded World 2007
A new version of Testwell CTC++ Test Coverage Analyzer is now available. CTC++ 6.3 comes with various enhancements and an integration for Visual Studio 2005 IDE. The HTML report is enhanced (report sorting, directory level summaries, etc.). There is also an "ctcwrap" integration on Unix makefiles and other commands.
Our maintenance customers will receive the new version free of charge.

Conformiq, the leading, innovative tool for Model Driven Quality Assurance (MDQA), is now available for evaluation.
The only commercial solution in the world that supports both on line and off line testing, Conformiq sets up the standard for model driven testing.
Further information and free evaluations: Conformiq 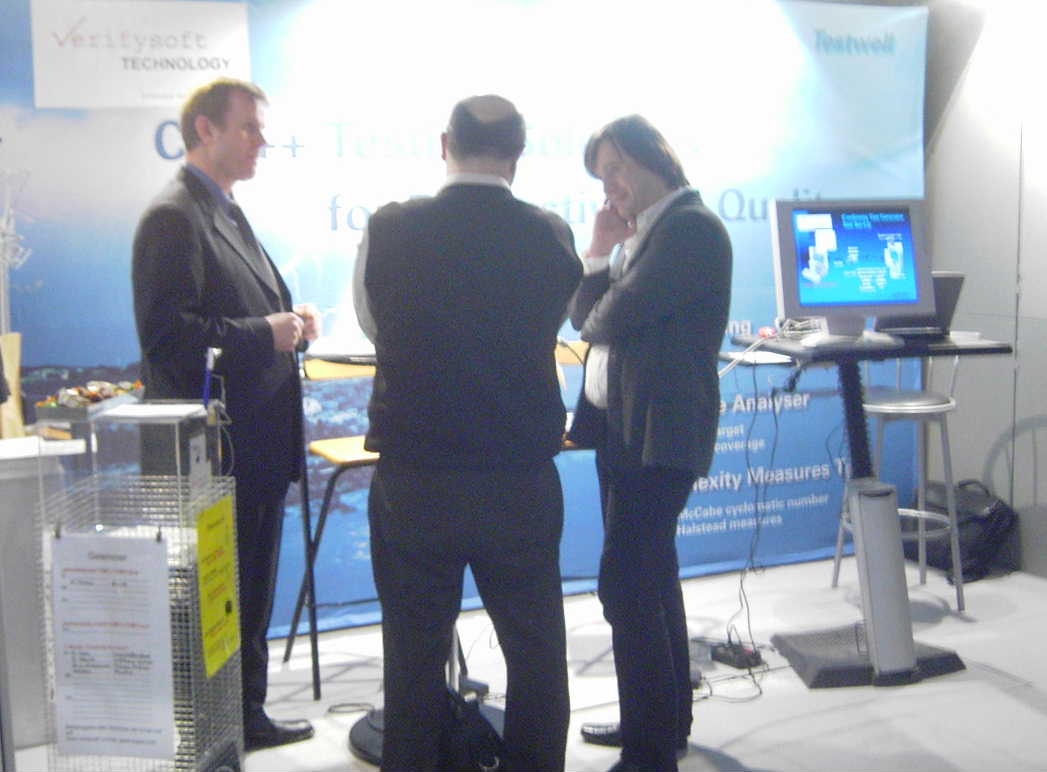 Verifysoft Technology was present at the OOP 2007 conference that was held in Munich, Germany. We presented new tools and add-ons for our solutions.
Based on software design models, Conformiq allows the automatic generation and execution of black box tests.
Verifysoft showed also a statics testing tool for the detection of run-time errors in large code bases.
The new add-on for Testwell CTC++ allows code coverage measures for embedded systems in any (even smallest) targets.